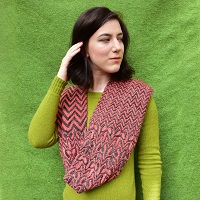 Xandy Peters is a knitting designer and teacher. She is best known as the innovator of the stacked stitch technique and for her Fox Paws pattern. After graduating from Pratt Institute with a degree in Industrial Design she was a footwear and product designer. Xandy turned to knitting as a way to explore textiles and surfaces without using factory production. She has since made a career out of knitting, publishing new patterns monthly and teaching workshops in her techniques. Xandy has been published in magazines such as Vogue Knitting, Pom Pom, Twist Collective, Knitscene, and Knitty, but publishes most of her patterns via Ravelry. Xandy also blogs about design, crafting, and baking on her blog soimakestuff.com and has a Facebook page So, I make stuff. Xandy is active sharing her knitting on Instagram as xandy peters.