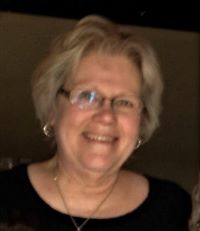 Sarah began sewing at a young age, learning the skill from her mother. She began making her own clothes in junior high school and later as a young mother she made her children’s clothing.   Continuing her love of sewing she now works as a designer and creator of repurposed items sold through her home business “Secondhand Rose”.

Her venture into the craft sales industry began as a young mother, sewing and making items for sale at a few local craft shows to finance her family’s summer vacations.  She then worked for an  embroidery company as an applique artist and was instrumental in beginning a sweatshirt applique division of the company which is still in operation today.  Later as a Consumer Sciences teacher at an  urban school district, she taught Fiber Arts to middle and high school students, including skills in  crochet, cross stitch, hand embroidery and machine sewing.

Several years prior to retiring from teaching, she found a new passion in creating items from repurposed materials purchased at resale or secondhand stores at costs much below purchasing  fabrics from a retail store.  Through research online for ideas and pattern making skills developed through life, the sideline business of Secondhand Rose was established.  The primary source for her creations is repurposed clothing and buttons, an element which attracts customers of all ages, particularly those concerned with the environment.

This past winter, at home during the pandemic, she discovered a way to repurpose the boxes of fabric accumulated from her stash.  Researching the process of twine weaving and eventually  purchasing a loom, she found a way to produce useful, sturdy yet beautiful rugs, placemats and table runners from sheets, muslin and men’s shirts.